Rewind to a Warmer Time

These were taken in October during an unseasonably warm spell that prompted a miniskirt.

My grandma visited us a few months ago so we embarked upon a fun dinner outing at a Chinese restaurant.  I elected to don horses for the occasion. 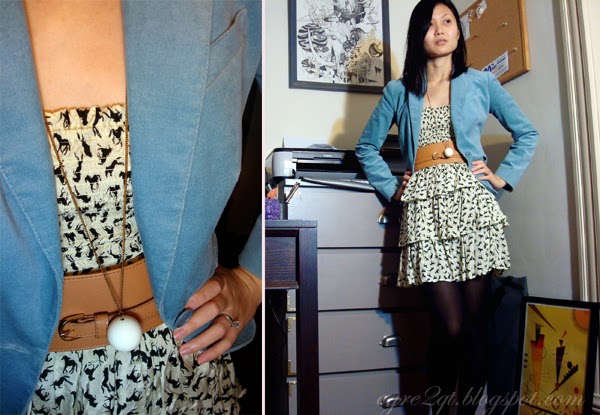 Email ThisBlogThis!Share to TwitterShare to FacebookShare to Pinterest
Labels: outfits

Waah, I let my blog lay completely fallow for the last several months. Needless today, many things have happened. Let's start by looking at pics of my outfits against a backdrop of 'new apartment scenery:'

Here we are in the new bedroom:

Ok, let's go to the kitchen:
As you can see, our kitchen boasts improved cabinetry and a bag of rice. My Kitchenaid approves. This kitchen is at least 3 times roomier than our old one.

And lastly, we will hang out in the living room:

A Campaign for Hacked Ikea Dressers

I have another dresser to introduce to you. 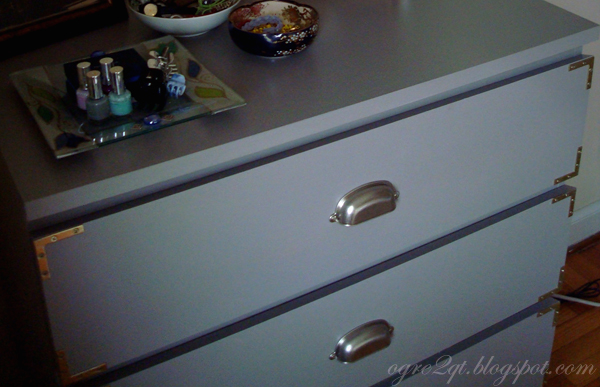 And NOW, an obligatory assault to the eyes: Ikea laminate furniture in its full glory.
Complete with a grad student apartment context and what appears to be a small pharmacy crammed onto the surface. Aaah, please make it stop!! 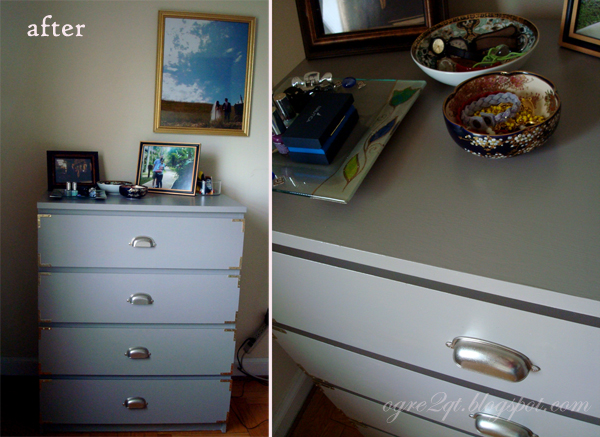 The sheer magnitude of improvement almost disturbs me.

I became aware of campaign furniture from....Pinterest. The look subtly masculine, yet chic. Campaign furniture was originally made for travel, specifically army travel. The UK Army and Navy manufactured a lot of this furniture in the late 19th to early 20th century, as reported by Wikipedia.  Now I, too, have my own little piece of history, and it houses a little birch Ikea dresser beneath its satiny grey exterior.

Here's a brief list of items I procured from trusty Home Depot to make my vision come to life: 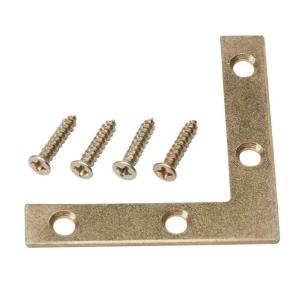 Brass corners ($2.50/pk x 4 pks = $10): to be completely honest, I'm not even sure what is the original intention of this product.
They can't possibly be made for the sole purpose of creating campaign-inspired furniture? 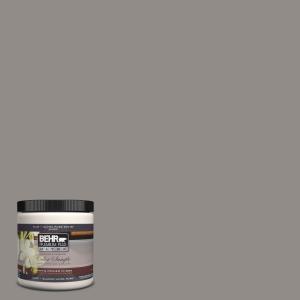 Behr satin finish paint "Creek Bend" ($13): this color is the It color right now for interior decorating. It's so hot, I'm afraid it will evaporate and I'll be left with a birch dresser again. Worst. Nightmare. Ever.

Oh, please also refer to my last dresser adventure wherein I laud the merits of Zinsser Oil-Based Primer. This product gave me the support and confidence I needed to see this silly project through to the end. I would like to thank it for my Lifetime Dresser Painting Achievement Award. 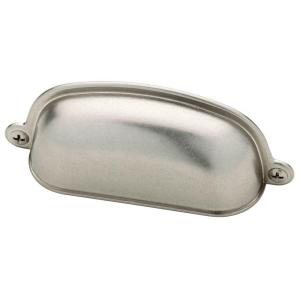 Cup pulls ($4 x 4 = $16): At first I was angry that this cup pull did not come in brass at the store. Online there were so many finish choices (copper, brass, nickel, polished nickel), my head was spinning (or was that the paint fumes?). But I wanted so badly for my dresser vision to come to fruition that I just Went For It. I think it was a good move. The mixed metal look adds some interest. 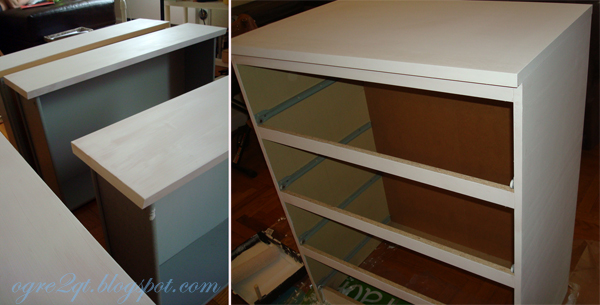 After one coat of primer (applied with a roller, then smoothed over with a foam brush), I applied two coats of Creek Bend (grey paint). I painted the whole thing with a foam brush---it created a much smoother texture than my last dresser which I painted with the roller.  The roller left all sorts of ridiculous fuzzies onto the paint.  A detailed discussion of fuzzies is probably not good for my sanity.
Poor Mike drilled all the holes for the brackets and pulls. At least he didn't have to do them by hand!

I think it looks like a treasure chest! Ahoy matey, what bounty lurks beneath! (Actually nothing right now, as we need to pack for our move in less than 2 weeks!!!) 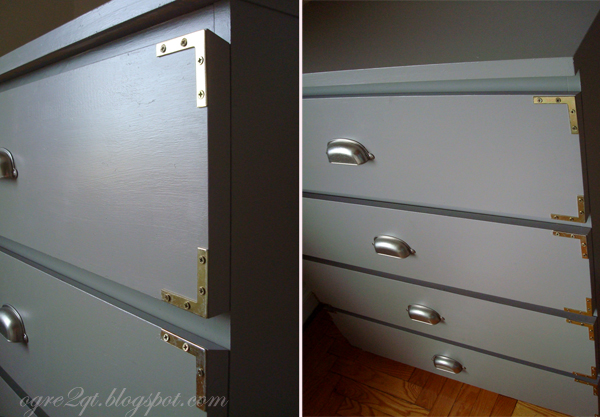 I may be MIA again for a while, as I have to move to another city, go on vacation to NOLA, transform into a pulmonary & critical care medicine fellow, and then take my medicine boards.
*explode*
Posted by Quyen at 10:30 PM 1 comment:

Hey look! It's a new dresser....wait a minute that looks familiar..... 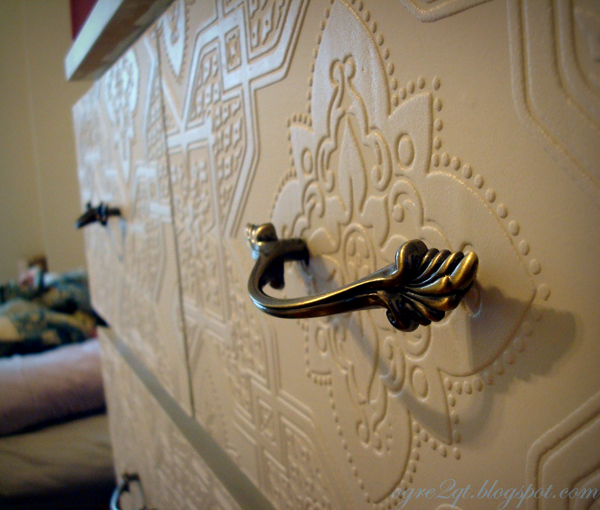 I caught the furniture makeover bug baaadly after spending too many hours on Pinterest.  My poor Ikea Malm dresser did not stand a chance. 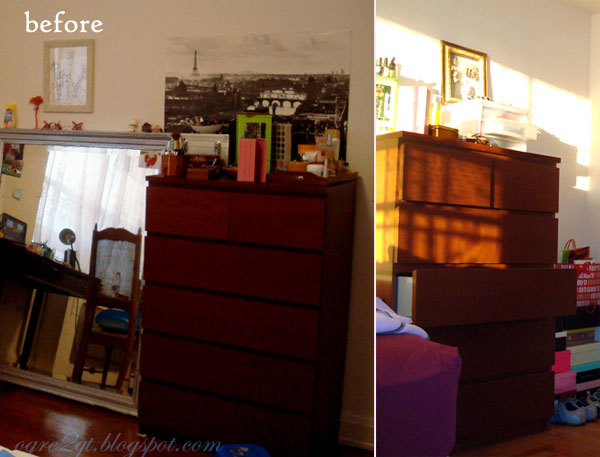 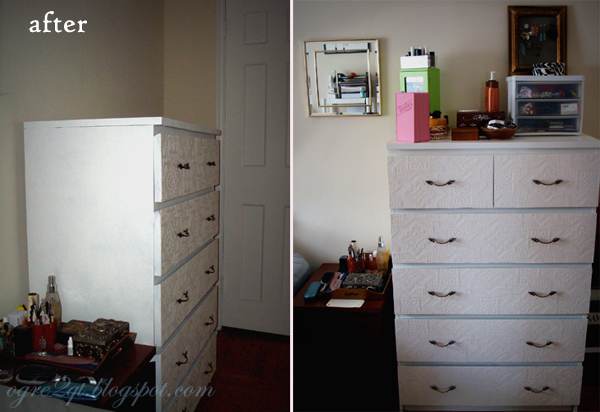 Here are my ingredients: 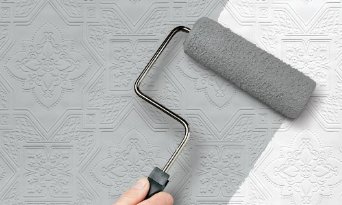 Paintable wallpaper ($15): applied to the front of drawers.
I cut strips to fit, then soaked them in the bathtub.
As I carried them from room to room, wallpaper paste dripped everywhere. 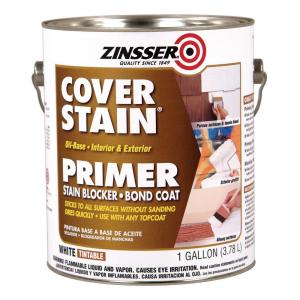 Oil-based primer ($8): miraculous product unanimously recommended by furniture DIY bloggers.
It allows one to paint over laminate furniture without sanding or pre-treating in anyway, which is perfect for apartment dwellers like me who lack tools and workspace. 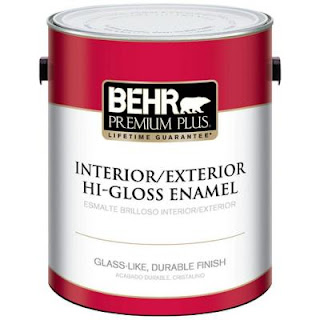 Behr paint (color = Pot of Cream) ($13): dries within 2 hrs and ready for a second coat!
Unfortunately, I did not splurge on paint conditioner so brush strokes and fibers of the roller were quite apparent. Oh well! 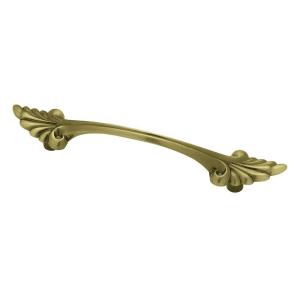 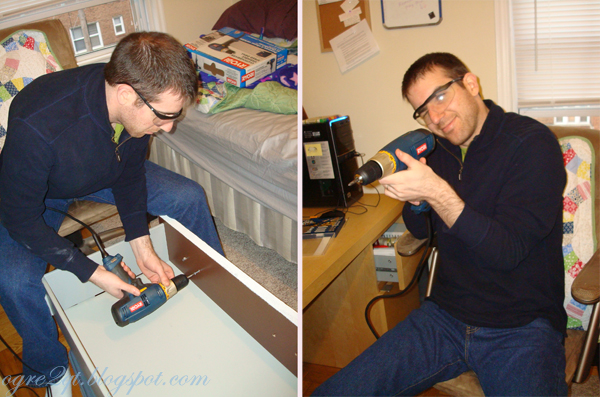 Husband with drill (priceless + $39): Mike got something out of this adventure, too: an electric drill!
Whoopeeeee!  He is sporting his favorite J.Crew shirt and new Levi's. 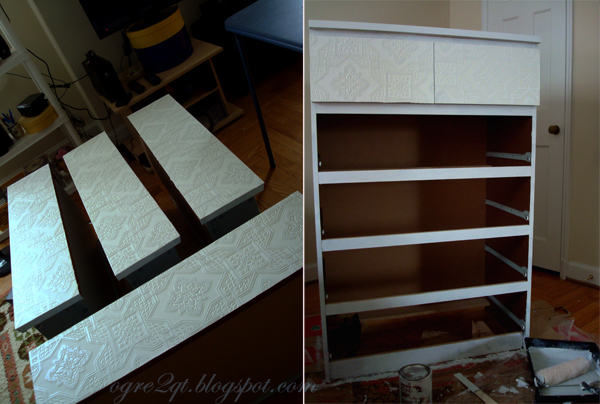 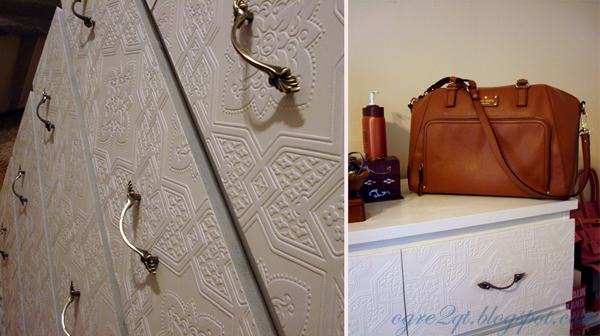 Oooh, and here the dresser is adorned by my newest acquisition ;)

Now, I still have a roll of textured wallpaper, 1/2 a can of primer for my next victim project, and most of the glossy white paint. Husband and drill also still available for commission (I hope).
Posted by Quyen at 9:35 PM 9 comments:


Cauliflower Soup
To make broth, I thoroughly washed some pork bones, then boiled them in water for about 1.5 hours.
During the first 45 minutes, all of this crazy scum surfaced, and I had to scoop it out non-stop. I took out so much scum that I actually had to add back some water to replenish the volume!
After a total of 1.5 hours of gentle, pleasant simmering, I added salt, pepper, and fish sauce to season the broth.
Then I added whatever veggies I have lying around: cauliflower, potatoes, and carrots. I then let it simmer further for at least another hour to let the vegetables tenderize and fill the broth with yummy sweetness and nutrients.
In truth, I should add the veggies in order of their cook time.  For example, carrots take longer to cook than cauliflower and potatoes and should go in first. But in reality, I am like WHATEVS and add them to the broth indiscriminately.
I added green onions last because I like them to stay greenish when I eat the soup for the first time. After the 2nd or 3rd day the onions are completely soften but still yummy.

Then I painted my nails, added some crushed black pepper, and CHOW CHOW CHOW.
Ouch, I think I burned my tongue.

Vegetable Korma
I made this twice.  Please compare and contrast as you are able:
I found a recipe allrecipes.com. To start, I created a paste of eye-annihilating fumes composed of onions, shallots, garlic, and ginger. I accomplished this with a food processor, otherwise I sure would have chopped my own fingertips into the paste. The paste was then cooked in a little bit of oil and it actually smelled rather delicious. Then I added the potatoes and cauliflower. I let that sit for awhile until the water came out of the veggies and they softened nicely. Then I added curry powder and some canned tomato sauce. This made a beautiful orange curry sauce! It was like magic. To thicken it, I added almond flour. To lighten it and creamify it without milk/yogurt I used almond milk. Not a perfect substitute but I think it was still pretty good.

The second time I made it, I didn't have tomato sauce so I used diced tomatoes and it just wasn't the same...

Scallops Provencal
Let me preface by saying that scallops are SO easy to make at home that I will never order them for $27 at a restaurant again! And may I add that it's usually a restaurant that doesn't use $ or .00 in their menu so their scallop dish simply costs 27.
I bring to you...
Quyen's Yummy Scallops                                                                  10.
I adapted this recipe from Ina Garten.  She used lots of butter.  I used 0 butter.
First the scallops are salted and peppered. Then I dredged them in a mixture of all-purpose flour and almond flour in order to create a delicious crust.  I heated oil in a skillet (alas, unable to use butter) and dropped the scallops in. I let them brown, then flipped them. Flip!
After both sides are brown, Ina Garten starts to add more butter.  I simply do nothing.
.
.
.
Actually I just skipped the butter step and add some coarsely chopped shallots and garlic and let that swoosh around.  Then I added a splash of white wine to scrape up the brown bits stuck to the pan. Now.. this step is controversial to me...I added almond milk. I was trying to sub some kind of opaque fat but I don't think that it adds anything to the dish. It didn't taste bad though (in fact it was quite scrumpsh) so at least it wasn't destructive. Then some chopped flat leaf parsley, some lemon, some Dilaudid---wait no, not that.

Email ThisBlogThis!Share to TwitterShare to FacebookShare to Pinterest
Labels: cooking

Recently, I lamented that my yellow vintage furniture was dangerously straddling the line between vintage and disintegrating. See how the seat was punctured and sadly repaired with tape? This is how my poor chair dragged on for the last 10 years or so. How embarrassing! 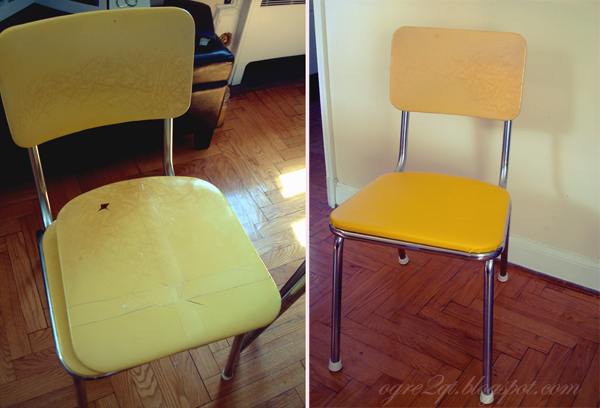 I went on an amazing adventure all around town to gather the items necessary to rectify this important problem. After a whirlwind tour of an upholstery shop, I brought home some new yellow vinyl (it was in the discount room for $8! Ha! They probably thought they wouldn't be able to sell it.) and some other fun-pattered fabrics. I also bought a staple gun at Home Depot. Be afraid...be very afraid. (That was addressed to all of the chairs in my home.) 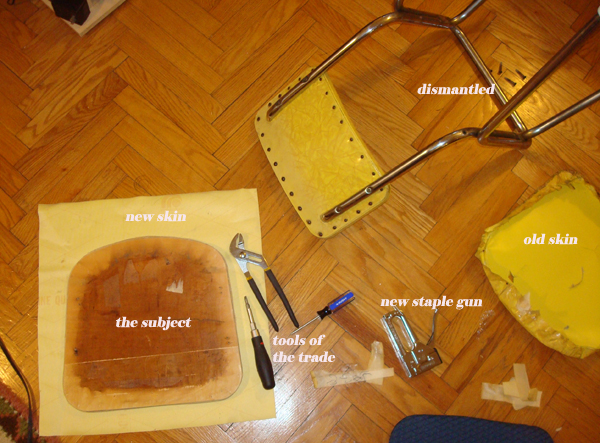 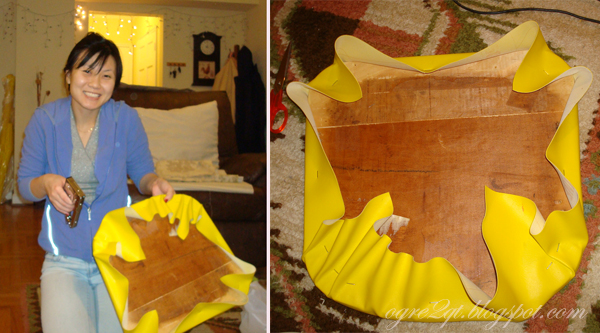 Before and after (actually, after and before): 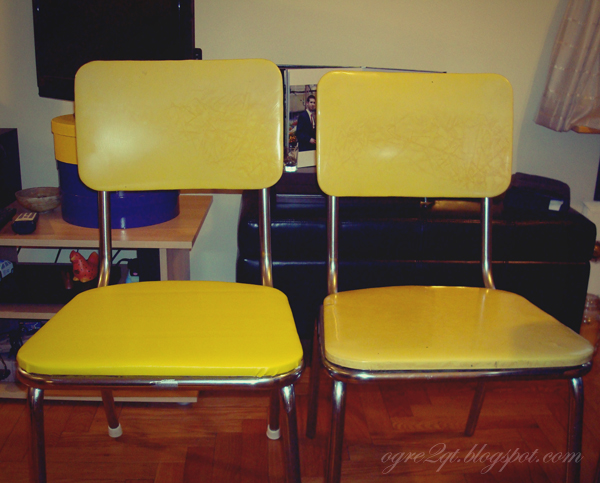 The new chair sits higher than the old one because I even got new rubber stoppers for its legs and now it is standing tall and proud, and slightly bouncy, too. The chair on the right is still in reasonable condition, but I probably will reupholster it, too, so that they match. Sadly, it is impossible to find the exact vinyl that is used for these chairs.  There are maybe just 2 companies on the internet selling this "cracked ice" vinyl and they charge $35/yd!!!! Holy moles that is expensive vintage vinyl! I think $8 plain yellow vinyl will suffice, thank you ma'am. I now have enough yellow vinyl to cover at least 8 more chairs. Anyone interested? Maybe you will be after looking at one last chair picture. 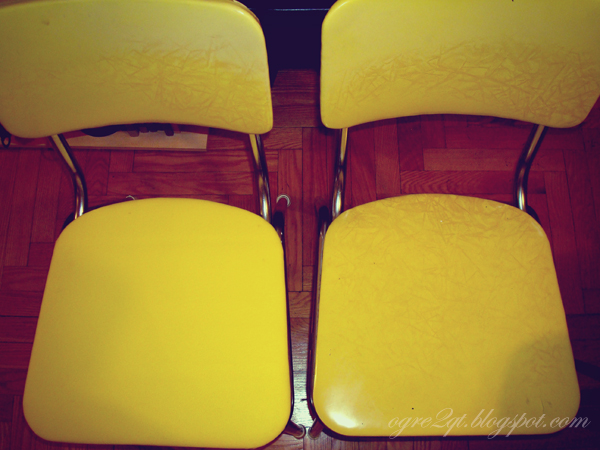 Convinced? I thought so.

I wore my Lola Cruz pumps outside the apartment for the first time over the weekend.  At first I was cautious because I didn't want any harm to befall them. But after about 3 minutes, I had all these errands to complete so I went on my way as if I was not wearing new shoes, clippity clopping through the cityscape. And nothing bad happened. Yay. 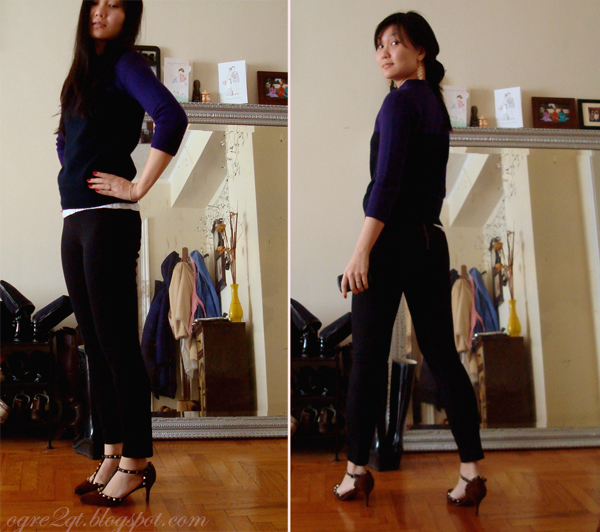 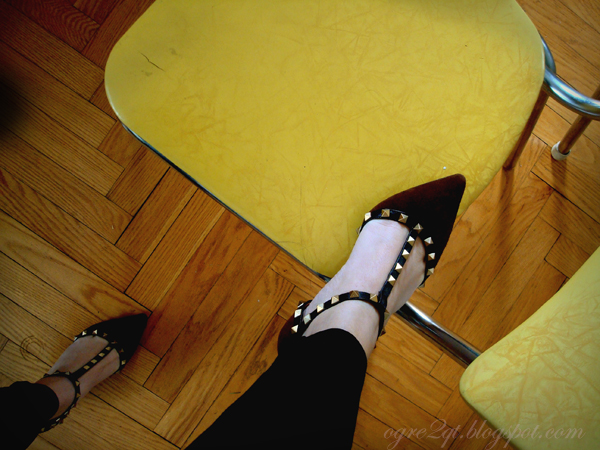 That's a lot of yellow furniture in the background! Stay tuned for my reupholstering adventure.
Posted by Quyen at 7:48 PM No comments: